- correct angle and force of a swing are important - HELL YEAH
- you can enter an options menu that allows you to change the force necessary to perform powerful swings
- flick Wiimote to pull out sword - JUICY!
- quick on-the-fly weapon switching, no inventory - REAL_TIME WEAPON CHANGING - WRESZCIE

- quick-time event for enemy parry, when the situation comes up
- once you fire a shot, enemies will charge you
- yellow indicator is always present on screen
- there are different weapons, such as a shotgun
- seems that weapons will be upgradeable somehow
- block bullets with your sword - jaaaaaasne. ale dla mnie może być ;p
- if you start the game without the MotionPlus accessory, the screen will stay black and the game won’t progress
- Setting: eastern influences mixed with wild-west america set in the near-future
- other areas in the game will also show Asian influence
- art direct flew to Japan and took about 6,000 pics in order to get a good feel for the design approach
- main character is the only one able to accomplish the task of saving the world
- a warlord is the main villain
- more that 15 different enemy types - spróbowaliby mniej
- no one from the first game returns - AHA
- some enemies will have heavier armor and bulletproof vests
- at least 5 bosses
- story development came last, gameplay was first
- 30% linear, 70% free-roaming within massive levels
- 70% huge free-roaming levels in which you receive new missions via radio - METROID PRIME STYLE?
- choose the missions you want
- destroy barriers with Katana moves you learn later
- 6 enemies maximum at once - mam nadzieję, że jest to podyktowane tylko systemem, który stawia bardziej na pojedynki niż rozpierduchę
- as of right now, the game has 10+ hours of content - jeżeli to będzie prawdziwe, twarde plus 10, to OK 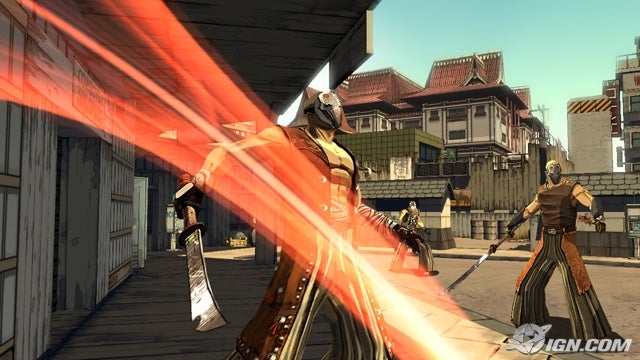 NL: The Motion+ implementation is great, but did you or do you have any concerns over the attachment?

JV: Obviously the big concern is that we're selling to a reduced userbase, and it all depends on how well the attachment is taken up by the console owners. We looked at doing a version without MotionPlus, and the lag from when you attack was something like half a second, which doesn't sound like a lot but ends up with a game totally different from what you played today. There's a reason there haven't been many games like the original Red Steel since its launch, which is that it just isn't possible to get the right level of accuracy without MotionPlus.

NL: With that in mind, did Nintendo give you a lot of support to get to grips with MotionPlus?

JV: Oh yeah, they were great. We got our first MotionPlus a few weeks before it was officially announced, and we were like "now we can do it!". Nintendo were great though, they gave us loads of early libraries for MotionPlus and really gave us a lot of support. In a wider sense we worked very closely with the guys over at Retro Studios, and the producer of Metroid Prime came to work with us and gave us a lot of insight into how they handled things.


Red Steel 2 Hands-On
Ubisoft's Red Steel sequel was playable at E3 09, and we wasted no time jumping on the game at the company's booth.

Red Steel 2 is an interesting proposition. It's the sequel to a game that was poorly received upon release, but the developers genuinely seem to have learned a lot from the experience. The sequel has a completely different story to the original, and, in fact, the only thing that the two games have in common is the gun/sword-based combat. We managed to play the game for the first time today at the LA Convention Center, as well as find out more about it with lead designer Roman Campos Oriola.

Red Steel 2 is a Western/Japanese hybrid, with a storyline that mixes ninja swordplay and a Wild West setting. As the main character, you decide to return home after many years, but you're captured by a rival gang and are dragged into town by a rope attached to a motorcycle. You manage to shoot your captor and make your escape, and the tutorial introduces you to the basic movement and combat controls.

You aim and move just like you did in the original Red Steel, but Wii MotionPlus support means that the controls are much more refined than before. You push your aiming reticle to the side of the screen to turn, for example, but now the farther you push, the faster you turn. The support for Nintendo's latest peripheral also really improves the sword combat, which is much more accurate than before. You really need to make huge swipes with the remote for strong attacks on enemies with armour, while holding the A button lets you perform highly accurate parrying moves.

While the controls are an obvious improvement to Red Steel 2, we also have to compliment the game on its looks. It could be described as cel-shaded, although the game manages to retain a gritty edge, but it certainly has a distinct visual style all its own. Even better, it's running in 60fps at this stage, although that could change according to the technical limitations placed on the final build. Sadly, the same can't be said for the violence--while you can hold A to perform finishing moves, such as a sword-based execution, there's not a drop of blood to be seen in any of the game.

One of the coolest things we did in the game was break into a safe. You hold the Wii remote up to your ear and then tilt the remote to turn the wheel on the safe. When you hear a click through the Wii Remote, you know that you've hit the correct combination, and you have to do this three times to open the safe. It's definitely a cool little minigame, and even over the noise of the show, we still managed to get into the safe.

Developer Roman Campos Oriola left us with one final tease from the demo, which he showed us after we'd played through the first level. He showed how, about one hour into the game, you can upgrade your sword with special powers, such as the ability to fling enemies into the air. Once they're in midair, you can shoot them or jump up in the air and smack them down to earth. Finally, he told us that Red Steel 2 is going to be a strict single-player experience, so no multiplayer features will ship in the game.

We really enjoyed our time playing Red Steel 2, and even though we played it on the show floor, we didn't have any problem getting into the new swinging mechanics of the swordplay. We hope to bring you more on the game post-E3.