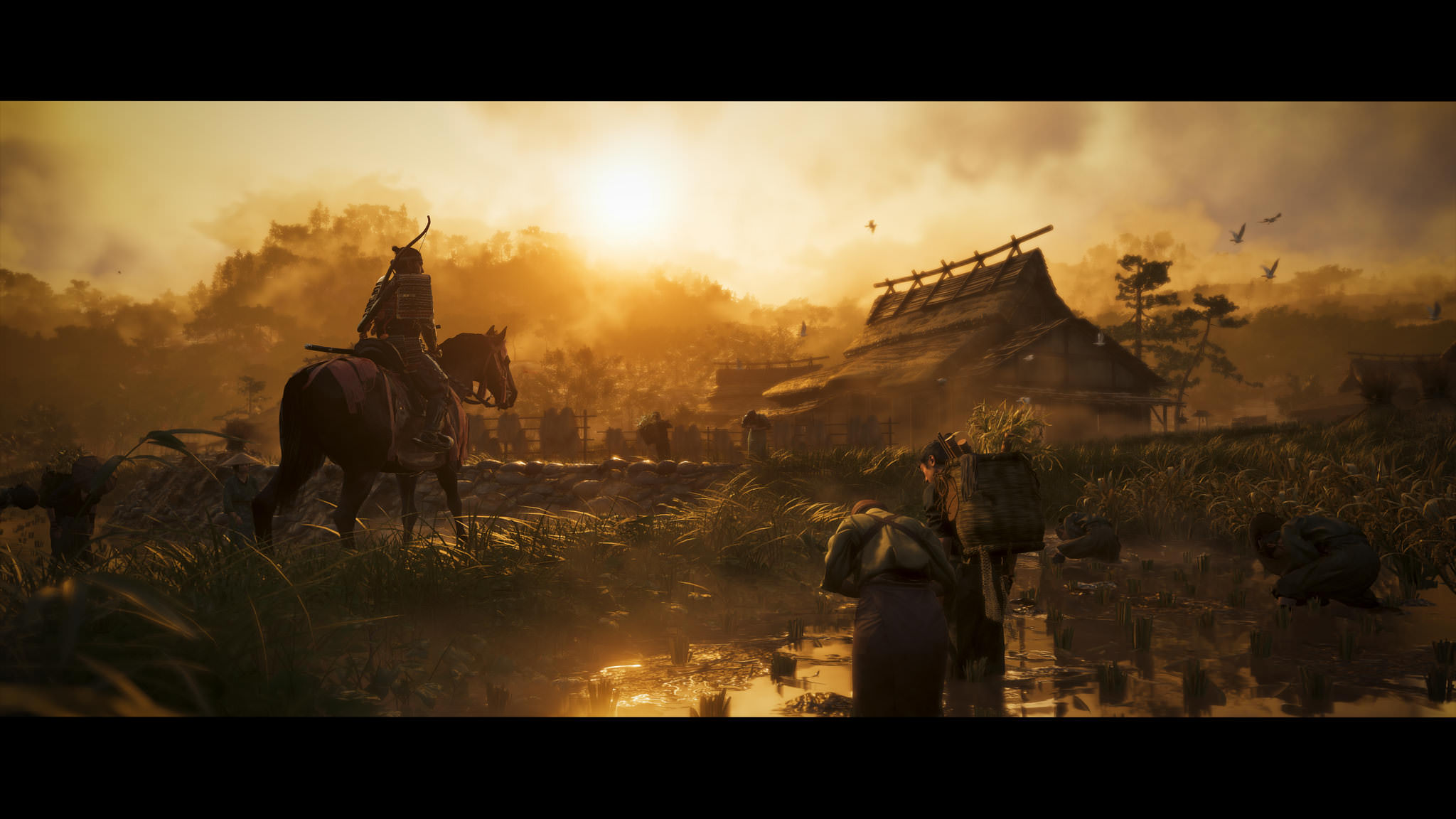 Samurai﻿﻿ were the most respectable people in Japan, people bow to Jin as he passes by on foot or horse﻿back, but samurai were also feared; s﻿ome women and children will attempt to hide or flee at the sight of Jin, while others will attempt to attack in order to prove themselves, or take some of the valuable gear a samurai would typically carry. This all helps to make the world feel alive and immersive. Not sure how often these civilian interactions occur.﻿﻿﻿

Japanese voice over is a must for this game in order to truly feel like a samurai epic, but the English is superb (as many of you could probably tell from the reveal trailer.﻿
Each outpost has a story behind it and a quest line, not just "take out these soldiers and you retake the village". Villages can be retaken by Mongols if you do not c﻿﻿omplete the quest line.

The game has two central towns (think Witcher 3), and many smaller outposts / villages.﻿
There are NPCS who can help train you in the ways of the Ghost, as for a Samurai, it would be a completely different form, and dishonorable way, of combat. Don't expect Jin to be able to right out of the gate know how to throw shuriken, use kunai, use alchemy ( poisons, create potions, and explosives), use grappling hooks to get on top of rooftops, quickly, etc.

2 major skill trees with many branches; which are way of the samurai, and way of the ghost. Samurai focusing more on sword play, archery, and defense, while ghost focuses more on stealth, alch﻿emy, and agility.

Samurai skill tree is fully unlocked fro﻿m the start, while ghost requires you to complete tasks in order to unlock a specific branc﻿h, such as working with an alchemist in order to learn poison abilities, or to create﻿ potions with strong effects.﻿

You will be free to switch between samurai and ghost kits. Jin in full samurai armor won't be able to climb buildings (you can still jump, don't worry) or swim/dive, and would be fit more for a defensive, all out attack build. This can be balanced out however by mixing kits. You switch by﻿ going into any outpost / town, there you will also be able to sleep in order to pass the time, so if you prefer to tackle a mission at night as a ghost, or at day as a samurai, it's up to you. So for a more grounded approach, samurai is recommended.

Think of climbing buildings as a faster paced assassins creed. Tenchu style grappling hook makes it even faster.
You don't necessarily want to be see﻿n in your ghost kit, as people may take you for an assassin and will sometime be hostile toward you. The game recommends y﻿﻿ou to be the ghost at night, but samurai at day. Some quests will only be handed out in your samurai gear, or only in your ghost gear, such as assassination requests. Double agent type of system and story to back it up.﻿

Way of the Samurai i Wiedźmin w jednym